Going into the Bend Half Marathon I had no real expectations. It’s a very hilly course and although I put in some nice long runs during training, I never really did much speedwork or tempo runs so I definitely wasn’t looking to PR at this event. Finishing less than two hours would be nice but I would be happy just to cross the finish line. 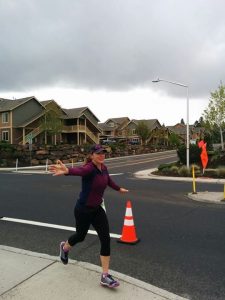 The start is right in our little downtown area which is a very cool venue to stage a race. The half marathon began right on time and off we went. It quickly went from downtown to along the Deschutes River and through beautiful Drake Park. And then the hills began! You quickly have a 200’ climb in less than a half mile with a quick decent. Next it’s a beautiful run along a different part of the Deschutes River then right through the main part of Downtown where spectators cheer you on. Back on the Deschutes you run along the river until around mile eight where you start climbing once again. This is where you have to dig in as it seems the climb goes on and on. Fortunately, once you turn the corner around mile 10 it’s downhill for most of it – there is one very short but steep section many runners walked up. The final finish in and through Drake Park is a little tricky as the Finish Line is actually around a corner so you can’t see it until the end, and it is slightly uphill which adds to the agony!

I did manage to finish in 1:58:10, less than my two-hour goal so I was very happy. And because of being able to train on the course the hills didn’t seem as hard to me as they did to others – the benefit of running a race in your own backyard! This is a very well run event, organized and great swag on a beautiful course. I feel blessed to be able to run and train on this any time of year and not have to wait until the next Bend Half Marathon event!