The Deschutes Dash is our only local triathlon in Bend, OR with a unique river swim.  The swim takes place in the frigid Deschutes River and swims downstream making for some very fast swim times, even for the very slowest of us swimmers (aka, me!).

The Deschutes Dash was my first triathlon in 2015 after almost two years off.  I signed up for it then with just three weeks to train before race day.  Originally I was only going to do the sprint as I had not been training but my husband encouraged me to do the Olympic, and three weeks later, that’s where I found myself my first summer in Bend, July 2015; a PR Olympic Triathlon (thanks to the current swimming down river) and a brand new member of Deschutes MultiSport Club, or DMC. 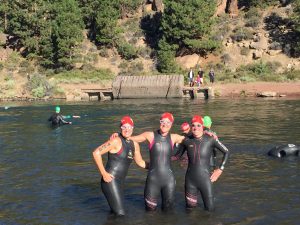 Swim start with my training partners Angi and Kathy

Today I have a whole year of “training” with my DMC peeps under my belt so my hope was to do at least a little better than the year before.  But because of local politics, the event almost didn’t happen.  Fortunately, Fleet Feet took it over, and, with some significant modifications to the run and swim course, the event still went on!

So then my focus solely became the bike.  Since that was the only discipline that was exactly the same as the previous year, I needed to know my fitness had improved and that I could beat last year’s bike time.  Race day came and I felt ready to roll!

Because of “politics” the swim had to be shortened to the sprint distance so I finished my swim in 10:38 – unheard of for an “Olympic” swim course.  Then the bike course; 12 miles of solid climbing to the turn-around and then descend like crazy!  I accomplished my goal of beating last years’ time by 6 minutes, finishing the bike course in 1:29:48, which included dismounting and running into transition.  My run wasn’t anything to write home about but I finished the overall event in 2:45:42 and placed third in my age group!

I love the Deschutes Dash, even though the swim is in freezing river water; the bike is 12 miles of torturous climbing and the run is as brutal as ever after that bike, simply because it’s our local event and the new owners are amazing.  You’ll see me signing up for this event again next year and every year to come! 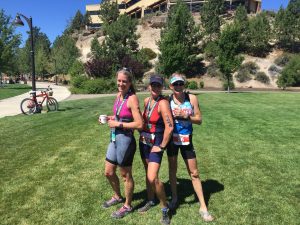