My First Attempt to Boston Qualify

Mountains 2 Beach Marathon; 700 feet of net downhill over 18 miles – not too steep but just enough to let gravity help; finishing on the beach in beautiful Ventura, CA; and the perfect setting to qualify for Boston. Sixteen weeks of training, four long months went into this race. The first half of training was questionable as I had caught a cold a week before training began that lingered in my chest for the following eight weeks. The last seven weeks, however, I really dialed it in – speedwork, long runs, tempo runs, strengthening exercises, diet – my training seemed to be right on track with where I needed to be to run a 3:45 Boston qualifying finish time (I later learned I only needed a 3:55 but I had already been training for a 3:45 so I kept it at that.)

Then Monday of race week my husband came down with flu-like symptoms and was in bed most of the day bundled up in sweats and under blankets – we’re in Lake Havasu City, AZ where it’s 105° right now! I started doubling up on the vitamin C and Zinc and avoided him like the plague. We both agreed this week was too important for me to get sick so he didn’t take it personally, although Gracie was concerned when Daddy didn’t give Mommy a kiss good-bye when I drove her to daycare – so cute!

Richard was pretty miserable all week and I seemed to be skating by…until Thursday night when I started feeling a scratchy throat coming on. I ignored it, not mentioning it to anyone in hopes that if I didn’t acknowledge it, it would go away. No such luck. On Friday we loaded up the car for our trip to Ventura and I was cold and achy. We stopped for lunch and I had to put a sweatshirt on and take ibuprofen to ease my achy body. By Friday night I had full blown flu-like symptoms. My long sleeve tee and long sweat pants I wore to bed were drenched with sweat even though I was freezing and I had to change in the middle of the night. Saturday we bought salt and honey so I could gargle with salt water and drink warm water with honey to help ease my sore throat. It was another cold, sleepless, sweat induced night until 3am when it was time to get ready for the race.

Running 26.2 is tough to do when you’re feeling 100% let alone fighting a cold and a known blister (another story). But I was determined I could do it. I took three ibuprofen at 3am then another two right before race start – note, don’t do that. I had a plan to run a 3:30 marathon if all the stars lined up and I was going to have a perfect race but since I already knew that wasn’t the case I spotted the 3:45 pacer in our coral and decided I’d try to keep with him.

Donna and I got into the back of our coral seven minutes before the race start so it was already very crowded and the 3:45 pacer was a couple hundred people in front of me. Once the race began I made my way through the crowd and fell in pace with the 3:45 group. It felt very comfortable and I thought this would be something I could do. Then he stopped at the first water station and I kept going. I had never ran with a pace group before and I didn’t meet up with them ahead of time to know their strategy so I figured I’d just go on my own.

It all seemed to be going well the first ten miles. I was fueling every 20 minutes with a Clif Shot Block or Gu but I wasn’t taking in as much fluid as I had during training. Also on a short incline around mile seven I felt the sting of the blister taking shape on my left foot. I knew I needed to average an 8:35 pace to meet my 3:45 goal and at this point I was a little ahead at an 8:20 average. 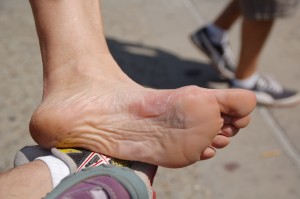 Shortly thereafter I knew I might be in trouble when, running downhill mind you, it was becoming difficult to maintain an 8:30 pace. I was coming up to the 13 mile mark and saw this could be a half marathon PR for me, and it was as I watched 13.1 click on my watch at 1:49:52 (8:23 average). That was enough to keep me motivated a little while longer. But my legs were getting heavy and the sting of a blister a few miles back was now forming into a serious pain. I told myself to get to mile 15 then take a short walk break. There was a water station around 14.5 and I was so thirsty I drank two or three cups of water – note, don’t do that – and also took my walk break through the station. I never fully recovered after that.

Miles 15 to 18 were really tough. It was still a slight downhill and I was struggling to keep it under a nine minute pace. Physically I was extremely nauseas, my foot was killing me, and I was still super thirsty. Mentally I was very upset that it was this difficult this early in the run; I kept telling myself that I had to keep pushing through this downhill portion as it was only going to be that much more difficult on the flats. Finally, just past mile 18 when I was just about to throw-up I took a walk break, called my husband, and held back tears as I told him I wasn’t going to make it. At this point I showed and average of 8:45 which, if I could have maintained, would have still got me in at 3:49 and a BQ. But there was no way I was going to be able to do that. Richard told me just what I needed to hear and that was, “it’s okay babe, just run/walk, take it easy, you’ll be ok.”

I still had 8 miles to go and knew it wasn’t going to be pretty. I was in serious pain and discomfort. The entire reason behind me running this marathon was to qualify for Boston and now that wasn’t going to happen so why continue. Had Richard offered to pick me up, which I was so hoping he would do, I would have agreed. It didn’t make sense for me to continue limping on for another hour and half when I wasn’t going to make my goal and be in that much pain. But he didn’t offer and I certainly wasn’t going to ask, so I shuffled along. It gave me the time I needed to get over the blow that I wasn’t going to BQ.

Earlier in the marathon I played leap-frog with runners for the first 10 miles, now I was playing leap-frog with a whole different group; others who were like me, running/walking just trying to make it to the finish. What was an 8:20 average was now an 11:00. My foot was in pain, my legs were like bricks, and I experienced abdominal cramping on and off. It seemed that everyone was passing; first the 3:50 pacer, then the 3:55; groups of runners chatting away; then just before mile 22 along came Donna. I told her I was sorry but it wasn’t going to happen today; handed her her phone (my got lost/stolen the day before so I was carrying hers) TRIED to pick up my legs to move a little faster to stay with her but it was no use. They were done. The mental fortitude I had hoped to use to push me during these final miles had been used up between miles 15-18. Now it was just about getting it done and I figured if I shuffled at an 11 minute pace that was still faster than walking at a 15 so I just kept shuffling along. 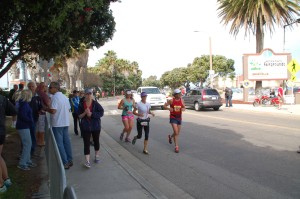 When we turned towards, and were running alongside, the ocean I thought about how beautiful it was and how sad it was that I wasn’t enjoying it. I had to use the bathroom so bad that’s all I could think about and fortunately just before mile 23 there were restrooms. I took two minutes to go, which I have NEVER done in a race before but at this point it was necessary. Richard and Gracie were standing along the road just past there and Richard gave me a look and asked, “What happened?” I ran over, gave Gracie a kiss, handed him my fuelbelt because it kept falling off (also which still had three full bottles – at mile 23 – not good) and told him I’d see him in a half hour.

The last three miles were painful, especially when the 4:10 pacer ran past me with her group, chanting words of encouragement and how I wished those words could have helped me. I was cramping and in so much pain at this point it was all I could do to keep shuffling along.

Oh when I saw the finish line what a happy moment that was for me! And there along the side was my wonderful husband holding our 40lb 2-1/2 year old daughter dead asleep in one arm and taking pictures of me with his big, bulky camera in another. Donna was there beside him cheering me on too, cold and wet, finishing her marathon in 4:02 and qualifying for Boston!

I crossed the finish line in 4:15:21 with a smile on my face and pain throughout my body. Once I found Richard I told him I so wanted him to pick me up when I had called back at mile 18 and I meant it. He said I should have just told him that and he would have come got me, that we need to have better communication next time.

I knew a lot of my friends were waiting to read about my results, expecting to see a Facebook post by 10am since I tend to be one who achieves my goals. An hour later, it was quite a humbling experience to have to post that I did not make it after all. What I didn’t expect to receive from that post was so much love and support from so many; friends, acquaintances and friends of friends, proud of me that I pushed through, set a personal record and finished despite my set-backs and what an inspiration and motivator I was even though I didn’t qualify for Boston. So in hindsight, I’m glad Richard didn’t come pick me up at mile 18 after all! J (And thank you to all who commented, it really helped!)

I swore I’d never run another marathon after this, unless I qualified for Boston, then I’d run Boston of course. It’s been five days since my qualifying attempt at the Mountains 2 Beach last Sunday. I have been very sick since then with a bad sore throat and terrible cough but my head is a little clearer now and my legs are no longer sore. So far there are four from Lake Havasu City that have qualified and will be trying to register for Boston 2015, my closest friend and training partner included. How can I come so close and let it slip by? People have said you’ll get it next year, but it’s this year I want it…. Did I see Eugene Marathon is a Boston qualifier and a flat fast course on July 27th? Track Town USA, the birthplace of distance running, finishing in Hayward Field where running legends Steve Prefontaine and Alberto Salazar ran. Hmmm, that just may be the perfect setting to finish this journey of mine. Maybe there will be another marathon (or two) in my future after all. 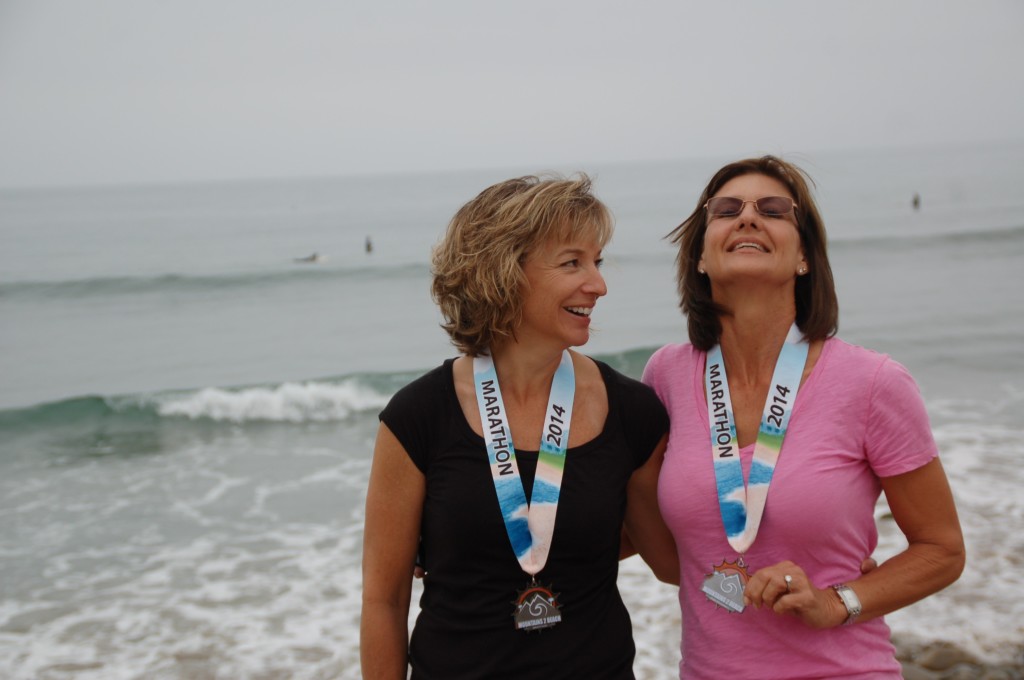 Have you ever not finished a race because of pain, injury or knowing you weren’t going to hit your goal? I would love to read your stories in the comments below.