Running the Marathon; Is It Worth It?

It’s Wednesday and early tomorrow morning I fly out to Phoenix, Arizona to run the Phoenix Marathon on Saturday. This will be my fourth marathon and my second attempt to qualify for Boston. Unlike my failed attempt last year, I have kept this marathon on the down-low. I haven’t announced publicly on Facebook or mentioned much about my training to friends. The disappointment of last year’s attempt still stings just a little. I’ve trained well, my last three long runs were at marathon pace or better, yet I know those final miles of the marathon are the hardest. That is where everything can, and has for me, fallen apart.

Which brings me to this post; as I dropped my baby girl off at preschool this morning I wondered if running the marathon is worth it? I will be away from her for four full days; I have only spent one night away in her short three years and four months she’s been on this planet. She’s been at my past three marathons with me; my first one I was five months pregnant with her. But this year we live in Bend, OR and the cost of the entire family traveling to Phoenix just for me to run a marathon is unjustifiable. So I’m traveling alone, staying with my best friend and former training partner, Donna, for four days, and fly back on Sunday. 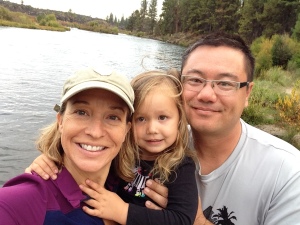 Our new home in Bend, OR; Gracie almost 3 years old.

If I qualify for Boston I know it will have been worth it; all the months of training finally paying off. Even if I don’t qualify and still make a sub 4 hour I’ll be happy, taking 15 minutes off my personal best. But what happens if it turns out like last year and I have a miserable race? I know all about the power of positive thinking; I practice it every day and did so very much at last year’s race. Even though I came down with flu-like symptoms two days before I kept a positive approach, knowing I’d beat it or at least run through it. But the cold got the best of me and after mile 18 I was done.

I really did not expect to be so torn up about being away from my family for this long. I know they’ll be fine; it’s me that’s having the hard time! There are benefits; I get to spend some quality time with Donna and other former run club members I haven’t seen in months. I’m hoping time with them will distract me from thinking about time away from my baby girl. It’ll be great bonding time for daddy and daughter.

So in the end, I know it’ll all be worth it. I just need to have fun with this marathon; whether I finish in 3:40 or 4:15 – it’s not about the finish time that matters, it’s about the journey.