If large crowds, long lines, and traffic congestion don’t bother you, then the San Diego Marathon is a great event.  Even with the thousands of people, packet pickup was a breeze.  It’s very well organized and easy to find where you were to go to get your packet.  After that it’s pretty simple as there is only one way to go and that is out into the vast expo area.  For those that like to browse, shop and sample I’m sure this was heaven.  For me it was extremely crowded, hard to maneuver a stroller through and I couldn’t get out of there fast enough.

Race morning we caught a shuttle from the hotel which got us to the race start almost two hours early.  That was great since we didn’t feel rushed as we meandered our way through Balboa Park to find the starting line and our corral.  With plenty of time to go we searched from one end to the other for coffee.  The ONLY coffee to be found was in the VIP area which they were very strict about who could go in and out.  And if you wanted to upgrade your registration right then to get coffee (some of us were desperate for a cup of coffee) that wasn’t allowed.  So disheartened and caffeine deprived we made our way to the middle of the park to stretch, take some pictures and hang-out until the start of the race.

The race got started right on time; there were plenty of porta-potties all along the course; bands playing every mile; plenty of aid stations; and the TNT Coaches throughout made you feel like they were cheering everyone on, not just their team members.  We ran through Petco Park stadium and through Old Town the first half.  There were a couple out-and-back segments which allowed me to wave to my friends.  At one point the half marathoners are running right alongside you on the other side of the highway which I thought was fun.  The worst part of the course was around mile 23 when you ran around some flat boring island that never seemed to end.  I must not have been the only one to think that because I read they took the island out of the course for 2013. 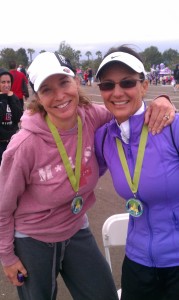 Donna & I at finish

My friends and I found each other easily at the finish.  I was disappointed there were no Mylar blankets but the photographers were everywhere which made for great poses.  We made our way through the recovery area grabbing anything we could to eat but we were so cold we just wanted out gear bags and find the family meeting area.  Once there we could see the long line into the beer garden and decided to skip it and just made our way home.

So all in all it’s a great event, very well supported, lots of entertainment; I’m just not into the large crowds and long lines and with the money it costs to do one of these, it will probably be my last Rock-n-Roll series for a while.